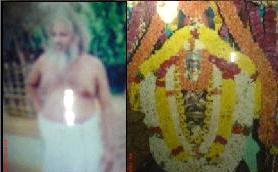 WHAT CANNOT BE CLASSIFIED AS TRUTH OR FALSE ?
ANS: MAYA(ILLUSION)


UPADESHA SAHASRI OF SHANKARACHARYA--
79. The self is regarded as the doer of everything though It
is a non-doer. It is pure. It runs ahead of those that run, though
it does not move at all. It appears to be many though unborn.
For It possesses all power by Maya.

ATHMA SAKSHATHKARA PRAKARANAM OF
SARVA JNANOTTARAM--SLOKA 47
WHETHER GOING FORWARD OR RETURNING
I AM NOT THE ONE THAT MOVES
FORWARD OR BACK. WHEN ENQUIRED INTO
THERE IS NO GOING OR COMING,
IN THE EVER CHANGING DHARMA OF PRAKRITI
THE CAUSE OF ILLUSIVE(MAYA) CREATION,
I NEVER WAS IMMERSED, NOR AM I NOW

AS PER SRI SWAMY SIVANANDA--

BIRTH & DEATH ARE TWO ILLUSORY SCENES
IN THE DRAMA OF THIS WORLD :
REALLY NO ONE IS BORN,NO ONE DIES,
NO ONE COMES, NO ONE GOES,
IT IS Maya's JUGGLERY,
IT IS PLAY OF THE MIND :
BRAHMAN ALONE EXISTS. Inside the Two Stones, no one survives

Meaning
Kabir sees the grinding stones as MAYA & MIND.
Jnani Kabir vehemently tells, in this moving mill
no one is able to escape from the clutches of their
grip.Whoever enters this duality is crushed, no
one survives.We have to conquer MAYA & MIND,
see DIVINITY every where.


WE HAVE TO APPRECIATE MORE THAN CREATION THE
STRONG GRIP OF MAYA UNDER LYING, HIDDEN IN IT,
FROM WHICH GOD HAS ENSURED THAT NOBODY
ESCAPES.

IN OUR LIFE WE HAVE SEEN ONLY ONE OR
TWO SOULS WHO ARE NOT HELD IN THE CLUTCHES
OF MAYA. SO YOU CAN IMAGINE HOW DIFFICULT IT IS
TO ESCAPE IT.

MOST SURPRISING THING IS SO CALLED 'GURUS',
'SANYASIES' WHO ARE SYMBOLS OF DISPASSION &
WEARING SAFFRON CLOTHES HAVE NOT ESCAPED IT.

SO OUR EARNEST REQUEST TO THOSE WHO ARE
SERIOUS IN PURSUING SPIRITUALITY IS TO TACKLE
MAYA & ESCAPE IT. ALL OTHER THINGS ARE
COMPARATIVELY EASY LIKE YOGA,MEDITATION,
CONTROL OF LUST ETC. 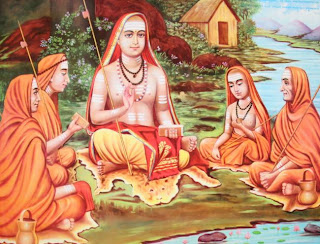 1. Maya, which is adept at making the impossible happen, superimposes on me (the Atman) who am in reality pure Consciousness, who am incomparable (because the Atman is the only reality and there is therefore nothing else with which it can be compared), who am eternal, partless, unlimited by space, time and other objects, in whom there is no differentiation whatsoever, the distinctions in the form of the world, God and the individual soul.*

2. Maya, which is adept at making the impossible happen, makes even those who have mastered the Vedas and the Upanishads behave no better than four-legged animals by tempting them with wealth and possessions. What a pity!

3. Maya, which is adept at making the impossible happen, makes the Atman which is of the nature of Bliss and pure and infinite Consciousness and is without a second, identify itself with the body made up of the elements, namely, ether, air etc., and whirl intensely in the ocean of transmigratory existence(repeated BIRTH-DEATH cycle)

4. Maya, which is adept at making the impossible happen, creates in the pure Bliss-Consciousness which is devoid of attributes such as caste, creed and the like, the notion of
'I'-ness, of looking upon oneself as a Brahmana, Vaisya, etc., as well as attachment to son, wife and home.

5. Alas! Maya, which is adept at making the impossible happen, creates in Brahman which is homogeneous, without any parts, distinctions such as Brahma, Vishnu and Siva and thereby perplexes even the learned by making them look upon Brahma, Vishnu, and Siva as different from one another.


*INDIVIDUAL SOUL, WORLD & GOD
Individual soul, the world & God appear to be different from one another only because of the limiting adjuncts. Intrinsically, there is neither difference nor identity among them, for all the three are in essence Pure Consciousness, homogeneous like a lump of salt. When the unconditioned Self has, as the limiting adjuncts, the body and organs which are characterized , it by ignorance, desire and action is called the transmigrating INDIVIDUAL SOUL.-- JEEVA. When the limiting adjunct is the power of eternal and unlimited knowledge, which is Maya, the same Self is known as ISHWARA(conditioned by MAYA)or MAYAVI, who is the antaryaamin or Inner Controller of the whole WORLD(MAYIKAM). The same Self, free from all limiting adjuncts, is FORMLESS GOD(BRAHMAN).

Email ThisBlogThis!Share to TwitterShare to FacebookShare to Pinterest
Labels: posted by ATHMA 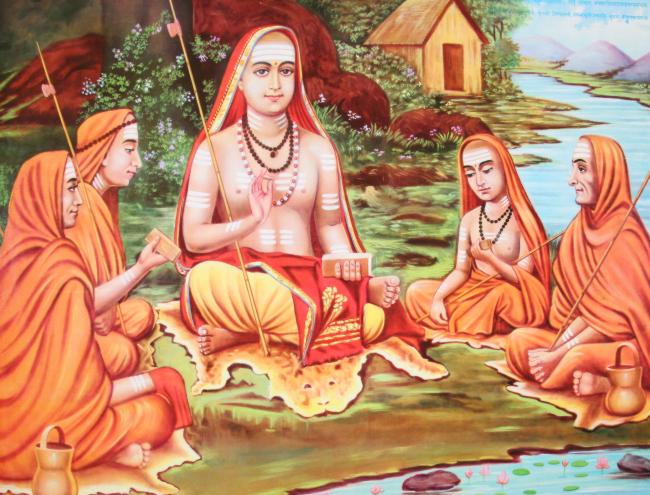